OpenMW supports scripts written in Lua 5.1 with some extensions (see below) from Lua 5.2. There are no plans to switch to any newer version of the language, because newer versions are not supported by LuaJIT.

Each script works in a separate sandbox and doesn’t have any access to the underlying operating system. Only a limited list of allowed standard libraries can be used: coroutine, math (except math.randomseed – it is called by the engine on startup and not available from scripts), string, table, os (only os.date, os.difftime, os.time). These libraries are loaded automatically and are always available.

Loading libraries with require('library_name') is allowed, but limited. It works this way:

Game object
Any object that exists in the game world and has a specific location. Player, actors, items, and statics are game objects.
Record
Persistent information about an object. Includes starting stats and links to assets, but doesn’t have a location. Game objects are instances of records. Some records (e.g. a unique NPC) have a single instance, some (e.g. a specific potion) may correspond to multiple objects.

Don’t be confused with MWSE terminology. In MWSE game objects are “references” and records are “objects”.

Cell
An area of the game world. A position in the world is a link to a cell and X, Y, Z coordinates in the cell. At a specific moment in time each cell can be active or inactive. Inactive cells don’t perform physics updates.
Global scripts
Lua scripts that are not attached to any game object and are always active. Global scripts can not be started or stopped during a game session. Lists of global scripts are defined by omwscripts files, which should be registered in openmw.cfg.
Local scripts
Lua scripts that are attached to some game object. A local script is active only if the object it is attached to is in an active cell. There are no limitations to the number of local scripts on one object. Local scripts can be attached to (or detached from) any object at any moment by a global script. In some cases inactive local scripts still can run code (for example during saving and loading), but while inactive they can not see nearby objects.

Currently scripts on objects in a container or an inventory are considered inactive. Probably later this behaviour will be changed.

Player scripts
A specific kind of local scripts; player script is a local script that is attached to a player. It can do everything that a normal local script can do, plus some player-specific functionality (e.g. control UI and camera).

This scripting API was developed to be conceptually compatible with multiplayer. In multiplayer the server is lightweight and delegates most of the work to clients. Each client processes some part of the game world. Global scripts are server-side and local scripts are client-side. Because of this, there are several rules for the Lua scripting API:

How to run a script¶

Let’s write a simple example of a Player script:

The script will be used only if it is specified in one of content files. OpenMW Lua is an inclusive OpenMW feature, so it can not be controlled by ESP/ESM. The options are:

Enable it in openmw.cfg the same way as any other mod:

Now every time the player presses “X” on a keyboard, a message is shown.

Each script is described by one line: <flags>: <path to .lua file in virtual file system>. The order of lines determines the script load order (i.e. script priorities).

Several flags (except GLOBAL) can be used with a single script. Use space or comma as a separator.

It is possible to modify a script without restarting OpenMW. To apply changes, open the in-game console and run the command: reloadlua. This will restart all Lua scripts using the onSave and onLoad handlers the same way as if the game was saved or loaded. It reloads all .omwscripts files and .lua files that are not packed to any archives. .omwaddon files and scripts packed to BSA can not be changed without restarting the game.

It is also possible to run Lua commands directly from the in-game console.

To enter the Lua mode run one of the commands:

Each script is a separate file in the game assets. Starting a script means that the engine runs the file, parses the table it returns, and registers its interface, event handlers, and engine handlers. The handlers are permanent and exist until the script is stopped (if it is a local script, because global scripts can not be stopped).

Here is an example of a basic script structure:

Every instance of every script works in a separate enviroment, so it is not necessary to make everything local. It’s local just because it makes the code a bit faster.

All sections in the returned table are optional. If you just want to do something every frame, it is enough to write the following:

An engine handler is a function defined by a script, that can be called by the engine. I.e. it is an engine-to-script interaction. Not visible to other scripts. If several scripts register an engine handler with the same name, the engine calls all of them according to the load order (i.e. the order of content= entries in openmw.cfg) and the order of scripts in omwaddon/omwscripts.

When a game is saved or loaded, the engine calls the engine handlers onSave or onLoad to save or load each script. The value that onSave returns will be passed to onLoad when the game is loaded. It is the only way to save the internal state of a script. All other script variables will be lost after closing the game. The saved state must be serializable.

Note that onLoad means loading a script rather than loading a game. If a script did not exist when a game was saved then onLoad will not be called, but onInit will.

onSave and onLoad can be called even for objects in inactive state, so it shouldn’t use openmw.nearby.

Serializable value means that OpenMW is able to convert it to a sequence of bytes and then (probably on a different computer and with different OpenMW version) restore it back to the same form.

Serializable value is one of:

Serializable data can not contain:

API packages provide functions that can be called by scripts. I.e. it is a script-to-engine interaction. A package can be loaded with require('<package name>'). It can not be overloaded even if there is a lua file with the same name. The list of available packages is different for global and for local scripts. Player scripts are local scripts that are attached to a player.

openmw_aux.* are built-in libraries that are themselves implemented in Lua. They can not do anything that is not possible with the basic API, they only make it more convenient. Sources can be found in resources/vfs/openmw_aux. In theory mods can override them, but it is not recommended.

They can be loaded with require the same as API packages. For example:

Each script can provide a named interface for other scripts. It is a script-to-script interaction. This mechanism is not used by the engine itself.

A script can use an interface of another script either if both are global scripts, or both are local scripts on the same object. In other cases events should be used.

Overriding the interface and adding a debug output:

A general recommendation about overriding is that the new interface should be fully compatible with the old one. So it is fine to change the behaviour of SomeUtils.doSomething, but if you want to add a completely new function, it would be better to create a new interface for it. For example SomeUtilsExtended with an additional function doSomethingElse.

The order in which the scripts are started is important. So if one mod should override an interface provided by another mod, make sure that load order (i.e. the sequence of lua-scripts=… in openmw.cfg) is correct.

This is another kind of script-to-script interactions. The differences:

Events are the main way of interacting between local and global scripts. They are not recommended for interactions between two global scripts, because in this case interfaces are more convenient.

An example. Imagine we are working on a mod that adds some “dark power” with special effects. We attach a local script to an item that can explode. At some moment it will send the ‘DamagedByDarkPower’ event to all nearby actors:

And every actor should have a local script that processes this event:

Someone may create an additional mod that adds a protection from the dark power. The protection mod attaches an additional local script to every actor. The script intercepts and modifies the event:

In order to be able to intercept the event, the protection script should be placed in the load order below the original script.

See the list of events that are used by built-in scripts.

Timers are in the openmw.async package. They can be set either in simulation time or in game time.

When the game is paused, all timers are paused as well.

There are two types: reliable and unsavable timers.

Reliable timers are automatically saved and restored when the game is saved or loaded. When the game is saved each timer record contains only name of a callback, the time when the callback should be called, and an argument that should be passed to the callback. The callback itself is not stored. That’s why callbacks must be registered when the script is initialized with a function async:registerTimerCallback(name, func). Name is an arbitrary string.

Unsavable timers can be created from any function without registering a callback in advance, but they can not be saved. If the player saves the game when an unsavable timer is running, then the timer will be lost after reloading. So be careful with unsavable timers and don’t use them if there is a risk of leaving the game world in an inconsistent state.

Also in openmw_aux is the helper function runRepeatedly, it is implemented on top of unsavable timers:

Find the directory resources/lua_api in your installation of OpenMW. It describes OpenMW LuaAPI in LDT Documentation Language. It is the source from which the API reference is generated.

If you write scripts using Lua Development Tools (eclipse-based IDE), you can import these files to get code autocompletion and integrated OpenMW API reference. Here are the steps: 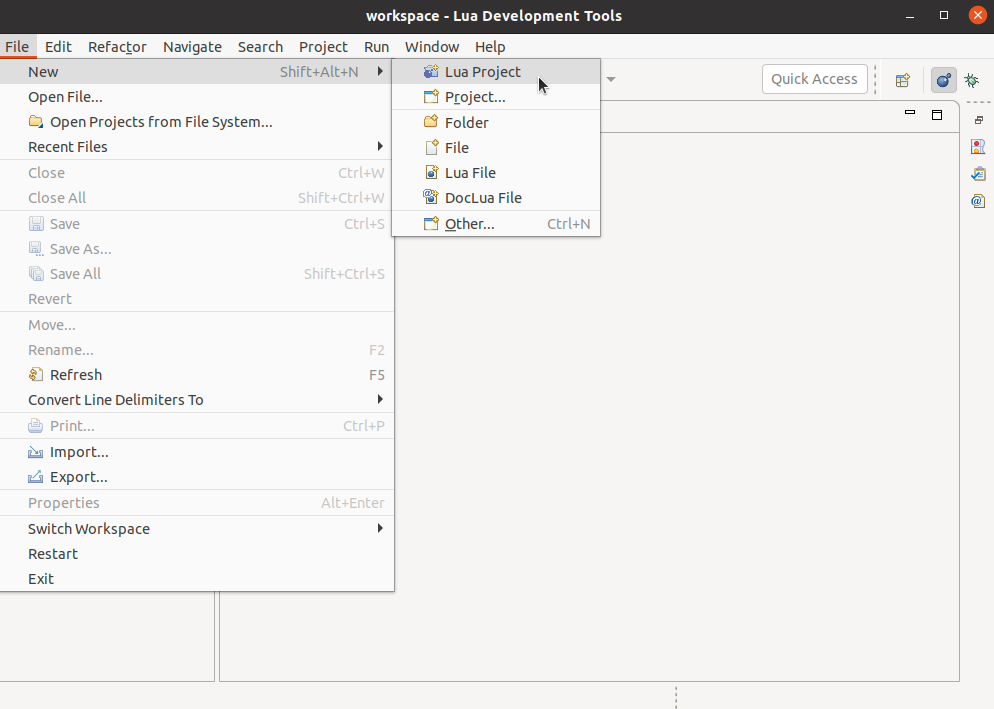 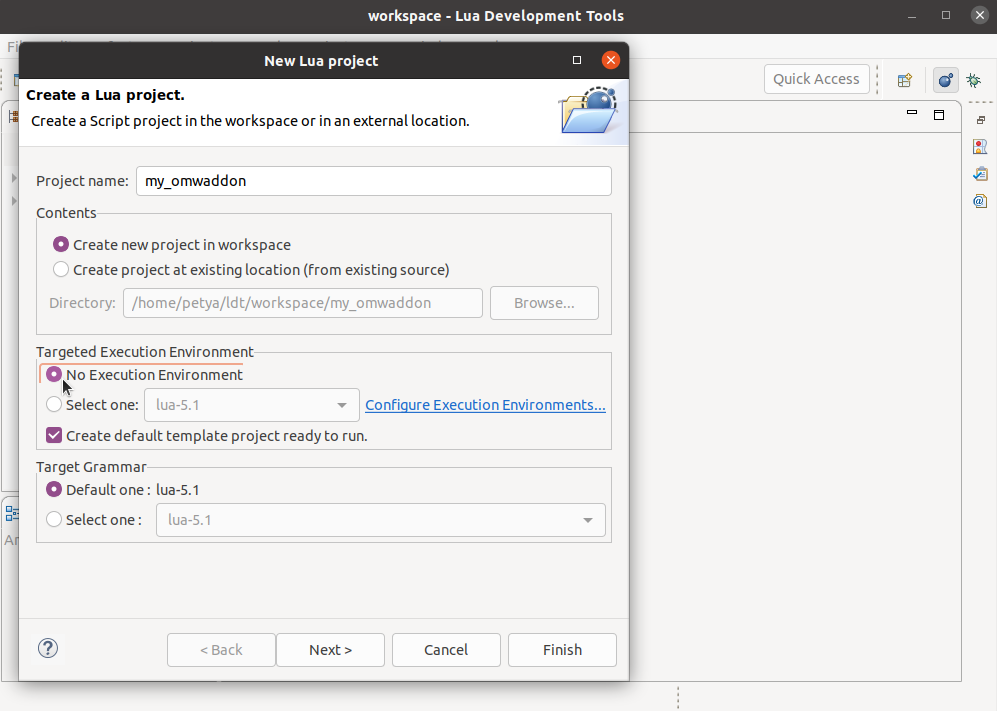 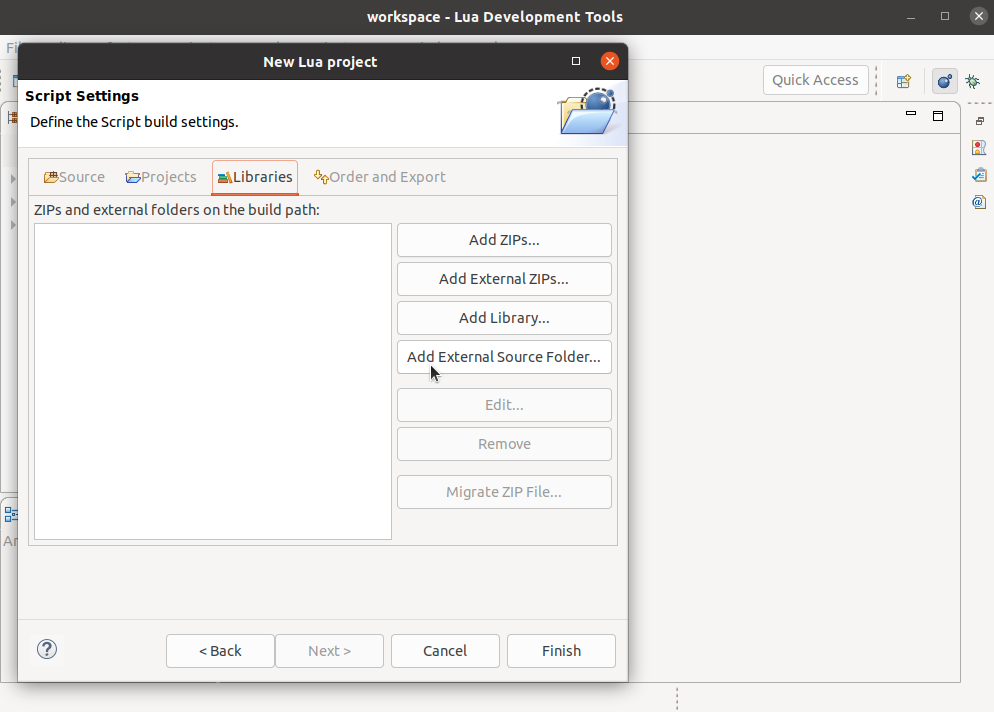 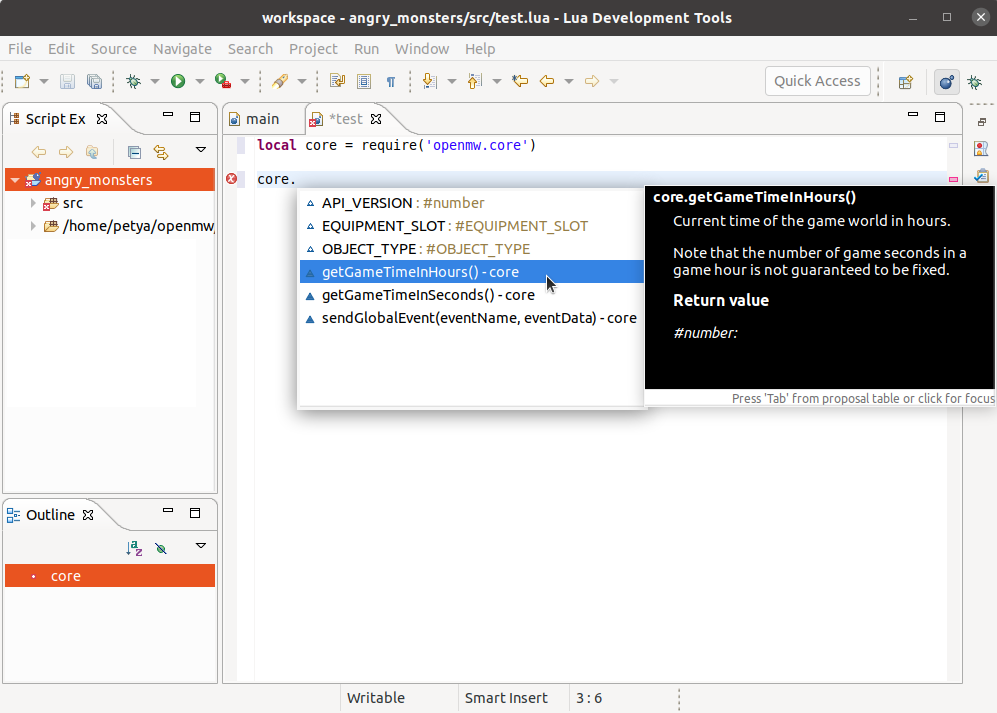 In some cases LDT can deduce types automatically, but it is not always possible. You can add special hints to give LDT more information: 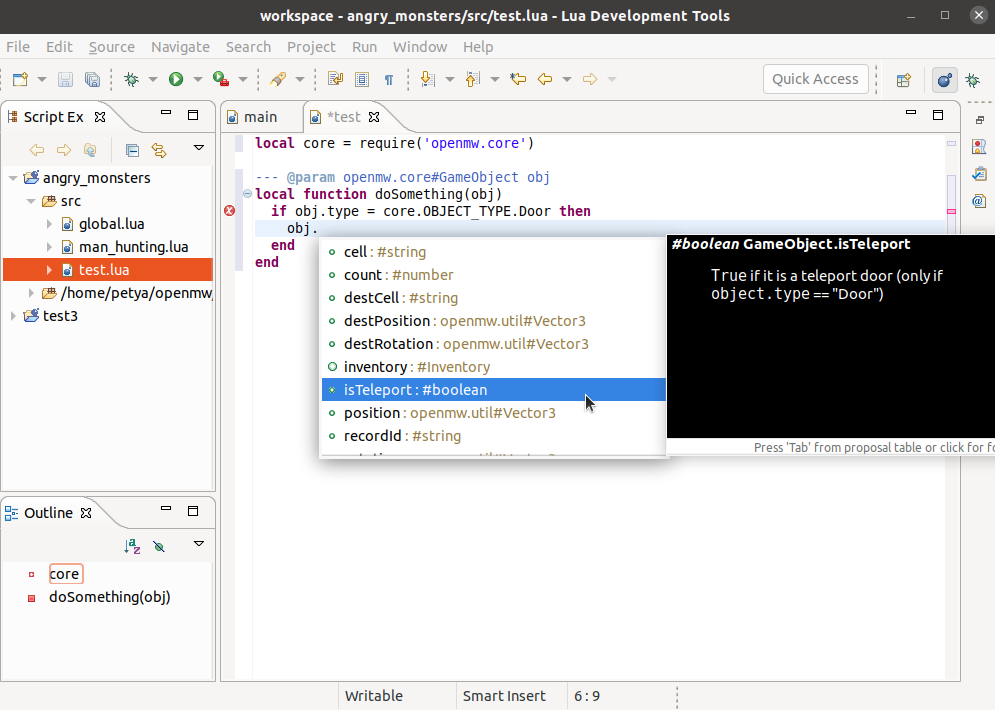 In order to have autocompletion for script interfaces the information where to find these interfaces should be provided. For example for the camera interface (defined in resources/vfs/scripts/omw/camera.lua):